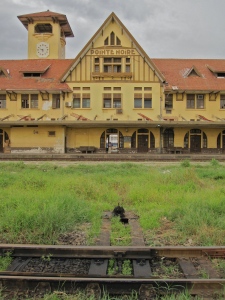 A few days into my trip I found myself sitting in a salon in Brazzaville waiting to be given a haircut. It was then that Nabir, a Lebanese man there to pass his day with his friend, learned that I would be traveling to Pointe Noire. He summoned a camera phone picture with excitement and said, “When I show you this, you’ll want to go today.” He held out his phone: a sunset over the beach illuminated two huge oil platforms in the distance. Looks like heaven.

To most it would. Oil signals opportunity, wealth, and business in Congo. The derivative businesses associated with oil are immense: subcontractors upon subcontractors reap the benefits of the oil industry by charging extraordinary fees. However, it’s not just subcontractors that swoon over available jobs. The amount of money that goes in and out of Pointe Noire is not lost on the local population.

I met a Scottish guy, Dave, who traveled to Pointe Noire for a series of safety trainings for Congolese workers installing power lines. Discussions about local salaries are always a subject of interest for me, especially when there’s Ngok involved. Luckily, it’s a popular discussion among those who want the outside traveler to know the reality of the people. Dave and his host were able to explain that in Congo, the average day laborer earns 150,000 XAF, or just about $334, per month. In comparison, a taxi driver expects to make anywhere between 12,000 to 15,000 XAF ($26-33) per day. The taxi driver then stands to make anywhere from 300,000 – 375,000 XAF (or roughly $667-834) per month based on working an average of 25 days each month.

And then there’s the lonely man factor. The term “night club” varies in meaning from country to country. In Congo, a nightclub is essentially a hostess bar. Pointe Noire has several options, ranging from Casino, a smoke filled gambling all with slot machines and eager girls looking for a complementary drink, to Master, a bar filled with girls that are not shy to give a price for extra-marital services. 25,000 XAF for a goodnight lay, just over $55. It’s no wonder than that it’s a thriving industry and a means to capitalize off the international presence in town.